I’m a little surprised just how well Venus Williams has handled her emotions during this tournament. Her car crash just days before the start of Wimbledon resulted in fatalities and with the families of the deceased blaming Williams, it can’t have been an easy time for her. She did in fact break down in tears during an early press conference but I shouldn’t have been surprised that she’s fared so well. She’s clearly mentally tough and sport can be great for providing a welcome distraction to personal problems. It also turns out that video evidence shows that the accident wasn’t Venus’s fault.

I did in fact tip Williams as one of my 4 ladies selections that I thought could fare well at a price, only to replace her with Angelique Kerber after considering the effects the car crash could have. Luckily I still backed her and even more luckily, Garbine Muguruza was also one of the 4 selections. Both players are serving well and look confident, so should Muguruza be the slight favourite in which looks very much like a 50-50 match?

Williams in fact leads the head to head 3-1 with the three wins all coming on hard courts but all were 2 years or more ago. Muguruza got the better of Venus in their most recent meeting and although that was on clay and the Wimbledon courts are believed to be playing slower this year.

Both have dropped just the one set so far. Muguruza had a 3 set battle with Kerber whereas Williams more surprisingly dropped a set to Qiang Wang. They’ve both had decent tests but Muguruza’s semi-final match may have flattered to deceive since Magdalene Rybarikova had no weapons to hurt Garbine with and she looked a little over-awed by the occasion.

I’ve heard of studies before where the thoughts on betting outcomes of the general public have been compared with those of so-called experts and the general public have fared better. Sometimes knowing too much can be a problem and you underestimate the simple things that really matter. The fact is Williams is a 5-time world champion here at Wimbledon and has 10 grand slam titles to her name. She has the kind of determination rivalled possibly only by Serena and at anything above evens I think she’s the value bet.

Venus, much like Serena can go into panic mode and start making a lot of errors. If Muguruza can remain consistent and hit as many lines as she did against Rybarikova she could get the job done. I just don’t see quite enough fight from Muguruza and if it goes into the trenches, I fancy Williams to come out on top. I hope I’m wrong as my 16/1 winner would look very nice on my tennis betting profile.

I use the excellent OnCourt tennis software to check tennis stats etc and that has a fairly in-depth predictor in it which can be modified to suit your analysis. It usually comes out with something pretty close to the odds available but for this match it has Williams as a 75% favourite. I think that’s a tad generous but it certainly adds to my belief that Venus Williams is the value bet at odds of 2.1.

Value bet: Back Williams to beat Muguruza at 2.1 with Bet365 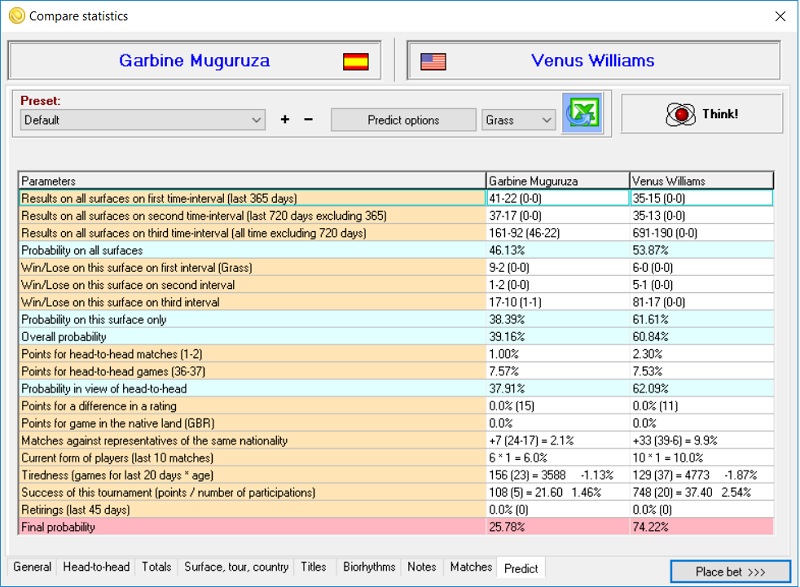