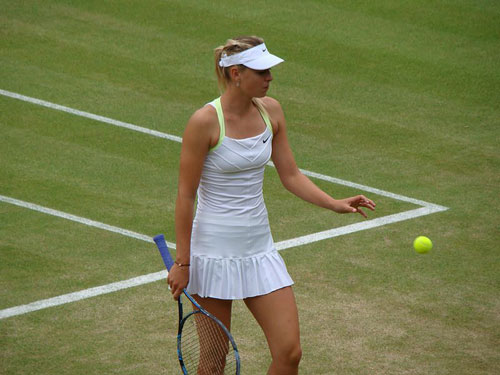 Women’s tennis has an unpredictable nature, and we would be hard-pressed to find a clear-cut favorite for this year’s Wimbledon as well.

Ranking leader Serena Williams could be considered a slight favourite for the title, but the truth is the American has been out of form this season. At least when you compare it with the run she had last season.

The same is true about world number two, Li Na, who showcased a very inconsistent form since winning the year’s first Grand Slam tournament, the Australian Open. Despite their relatively inconsistent form, both players has to be considered contenders, along with Simona Halep, Agnieszka Radwanska, Victoria Azarenka, Petra Kvitova, and of course the winner of the Roland Garros, Maria Sharapova.

Let’s take a more detailed look at the contenders, why we think they can win, and what can be their downfall.

Williams is the top-ranked player in the world at the moment, and without a doubt, the best player of the last decade, winning 17 Grand Slam tournaments overall.

Despite her great results last season (winning the French and the US Open), she hasn’t been able to relicate that form this year. Uncharacteristically, she flamed out in the fourth round at the Australian Open, but at the French Open she did even worse, losing in the second round. Of course, if anyone can bounce back in Wimbledon, it’s definitely her.

Li Na is the world number two player in the world at the moment, who became a multiple Grand Slam winner after emerging victorious at this year’s Australian Open. In the process, she grabbed her second Slam title after the 2011 French Open victory.

Li Na’s best result at Wimbledon is a quarterfinal appearance, which she managed to achieve three times. Maybe it’s time for her to finally have the breakthrough in London too, which would mean making at least the semifinals at all four Grand Slam tournaments.

Halep is the world’s third best player according to the WTA rankings, making the quarters at the Australian Open then losing in the finals at the Roland Garros. Although an up and coming player with enormous talent, her game is not necessarily suited for the grass, which would make it relatively surprising if she could reach the semi-finals.

Halep also went out in the second round at the ‘s-Hertogenbosch Open earlier this week and her chances seem to have dwindled that much more.

Radwanska, a former finalist is currently the number four player in the world, and unlike Halep’s, her game actually works well on the surface.

The only problem is that Radwanska is still without a title this season, and it would be quite shocking if she would manage to break that streak at Wimbledon. It’s not out of the realm of possibilities, but if she wants to achieve it, she definitely needs to improve.

Oh and did I tell you, she crashed out in the first round of the AEGON International earlier this week, making me wonder if she will continue to remain one of those players who are a part of the top 10 for ages but never win a Grand Slam.

Sharapova is currently fifth in the rankings but it feels like she should be higher. She managed to win the French Open just a couple weeks ago, and that was her third title this season. When in form, the former Wimbledon champion can blow anyone off the court, maybe with the exception of Williams, who has a 15-match long winning streak against the Russian. What’s interesting, one of the two matches where Sharapova managed to beat the American happened in the Wimbledon finals. Maybe a rematch is on the cards?

Her story is a contrast of Williams’. She had a poor previous season but has come back storming this year, with titles at Stuttgart and Madrid to go with the French Open. Interestingly, all those came on clay, so it will be quite a change, playing on grass and a lot will depend on her mental make-up here.

Ana Ivanovic is a personal favourite after her first ever title win on grass in Birmingham last week. Ever since she changed coaches last season, her play has improved and she has become a tad more consistent, which has seen her rise to 11th in the world.

Eugenie Bouchard has taken some strides in WTA tennis but does she has the killer instinct to deliver the final punch? Seems difficult at this stage. Victoria Azarenka will also be making a comeback after being out for months because of an injury it’s difficult to see make it till later in the tournament, having also crashed out of Wimbledon in the second round last season.

My recommendation:
Since Williams and Sharapova are now expected to meet in the quarter-final round, I expect Williams to go through to the final. Li Na has a relatively easier half of the draw, with the recovering Victoria Azarenka, off-form Agnieszka Radwanska and Petra Kvitova to take on – expect her to make it through to the final too.