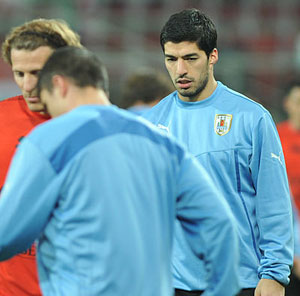 Uruguay and England will face each other in an extremely crucial Group D match that will potentially decide who bids adieu to the FIFA World Cup 2014 in the first round itself. The match will be played at the Arena de Sao Paulo at Sao Paulo on Friday, June 20.

While the team that wins this match will still be in with a shout of making the next round, the team which loses will most surely be out of the running for the knock-out stages. A drawn game will push the onus on to the result of the game between Costa Rica and Italy and the remaining two matches in the group.

Uruguay, who are ranked 7th in the world by FIFA in the Coca Cola rankings, suffered a huge setback in their Cup opener as they fell to minnows Costa Rica 3-1. The nation was left shellshocked in a match where the Uruguayan defence simply did not turn up.

Skipper Diego Lugano, and Diego Godin, who had an absolutely stunning season with Atletico Madrid, heading in the crucial goal at the Camp Nou that handed them the La Liga, will need to be at their imperious best if they are to keep out the likes of Daniel Sturridge and Wayne Rooney from scoring. Admittedly a struggling Rooney has odds of 13/2 (Coral) on him to open the scoring for England while Ladbrokes are offering enticing odds of 6/1 for Sturridge to be the match’s first scorer.

Uruguay also dearly missed their talismanic striker Luis Suarez in their opener as the forward was rested by Oscar Tabarez following a key-hole surgery on his knee a fortnight before the finals. Tabarez has since claimed that Suarez will start for Uruguay against England as the sky blues need to get a positive result to stay in the tournament.

Suarez will send plenty of chills down the spines of the English defence as he terrorized defenders in the English Premier League with 31 goals to his name for the season. The Liverpool striker is 28/13 to be an anytime scorer in the game, odds I am quite interested in.

Uruguay most definitely need to be playing with more freedom than they did against the Costa Ricans. The likes of Walter Gargano and Christian Rodriguez need to find the likes of Edinson Cavani, Diego Forlan, and Suarez more regularly if they are to win against England.

Tenth-ranked England performed fairly well against the Italians in the hot and humid conditions of Manaus. While it was the most exciting England team to be playing at a World Cup for years now, the inexperience showed through as well.

Italy knew when to go at their opponents and when to give themselves a breather by moving the ball around. England were at it from the very first to the last minute and majority of the players were suffering from cramps by the time the final whistle arrived.

While they went down 2-1 to Italy the other day, England surely have the potential to win and win big against Uruguay if their wingers and strikers still have the energy to go at the sky blues like they did against the Azzuris.

One move that Roy Hodgson must make is to push Wayne Rooney in to a central position behind Sturridge where the Manchester United man is at his best. Pushing him wide on the right does not help the team as opposition defences are normally scared of the sight of the man who is yet to register a World Cup goal.

Danny Welbeck may be sacrificed for Adam Lallana on the left while Ross Barkley also has a chance to make it into the lineup. Raheem Sterling is set to feature on the wings once again where he is at his lethal best. The rest of the squad pretty much picks itself and if England learn from the poor defensive errors that they made against Italy, the Three Lions have every chance of defeating the South Americans.