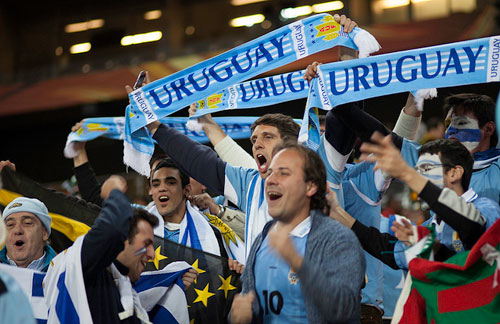 Champions in 1930 and 1950, Uruguay will kick off their FIFA World Cup 2014 campaign with a match against Costa Rica at the Estadio Castelao at Fortaleza on Saturday, June 14.

Uruguay failed to qualify for the finals directly from their group and needed a playoff to seal their finals berth for this edition of the World Cup. The defeated Jordan in that playoff to become the last team to claim a spot in the main edition of world football’s showpiece event.

Costa Rica, on the other hand made it directly from their World Cup qualifying group ahead of Honduras and Mexico, which is a great achievement in itself for the side which is seen as the weakest in this Group of Death and of course also featuring Italy and England.

Uruguay are heavy favourites to win with bet365 offering 1/2 for their win as compared to a whopping 9/1 (888Sport) for a Costa Rica victory. It is 7/2 (Boylesport) for a drawn game.

The South American side, coached by Oscar Tabarez have a good recent record in FIFA events. Besides their two wins in the main competition, Uruguay also claimed semi-final berths in South Africa 2010, where they were beaten by Netherlands, and in the Confederations Cup in Brazil last year. Uruguay lost the third place playoff matches on both occasions – to Germany and Italy respectively.

Although Uruguay find themselves in distinguished company in the group, it is thought that the South American team should be able to qualify from their group with the weather thought to play to their advantage.

What makes this a very vital encounter for Uruguay as well is the fact that a loss here will be followed by matches against England and Italy – two difficult opponents by any stretch.

Some of the great attackers who play for Uruguay include Premier League Player of the Year Luis Suarez, Diego Forlan, and Edinson Cavani. Suarez has been ruled out of Uruguay’s first game, probably because the manager wants him to be fully fit for their next couple vital ones, but the fans will hope the move does not back-fire.

With Suarez out, Cavani and Forlan are favourites to open the scoring in the game, with bet365 offering 4/1 and 5/1 respectively for that to happen.

Costa Rica have Bryan Ruiz pulling the strings for the side but can they spring a surprise here? I certainly don’t think so. I am expecting a few goals to be scored here and it to be an open game given that much like Uruguay, Costa Rica’s next two opponents are going to be tough nuts to crack as well.