The title IS won at Christmas (Usually) 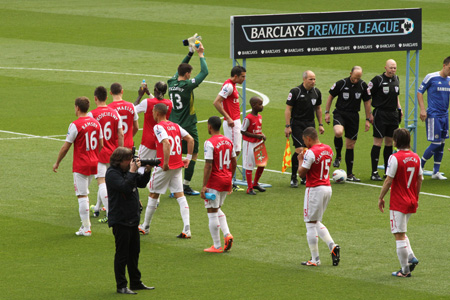 With the Premier League at the half way point and Arsenal top but not looking at all like a Championship winning team (in my opinion), I thought it would be worth seeing what has happened historically. Technically, Liverpool were top at Christmas for a brief moment but with the season now at exactly the half way stage, it’s Arsenal who are again top of the pile.

‘The Title is not Won at Christmas’ is a famous football Cliché but is this actually true? I planned to crunch the numbers myself but luckily the Daily Mail beat me to it and I can now tuck into some more Christmas leftovers.

In the last 21 seasons the team top just after Christmas (Boxing day) has gone on to win 11 times. Better still the team top at this time has managed to win in 8 of the last 9 seasons. So, like many footballing clichés ‘The Title is not won a Christmas’ is a bit misleading!

Is there a reason for this trend? Well, the premier league has become a top 4 dominated league over the last 9 seasons and with more of a gulf in class between the rest it makes sense that the team top at the half way stage would stay there.

Just because the data says that the team that is top usually wins doesn’t mean to say that this will happen on this occasion and a good bettor doesn’t blindly follow the historical data. We also must consider the size of the lead which is only one point. There was also only 3 point separating the top four on Boxing Day and the average difference is 9. So this year’s prem is much closer than that of most years.

We also have to look at the strength in depth of Arsenal themselves and their rivals. I watched Arsenal’s away win at Newcastle yesterday and to be honest you couldn’t even describe them as average they were that poor. I’ve never seen an Arsenal side give the ball away so much.

They were missing a few key players but it was much more evident that it should have been for a top four side. They can’t keep relying on Ramsey to get the goals either and they surely need to add to the very average Giroud and Bendtner.

Man City and Chelsea are clearly still strong contenders. City are absolutely on fire, scoring goals for fun and Chelsea are simmering nicely. Mourinho has struggled to get the best out of his attacking players so far but Chelsea still have big spending power and if anyone can convince their Chairman to buy it is Mourinho.

Manchester United are already effectively out of the running and the stats agree, showing that no team outside the top 6 on Boxing day (United were 7th) has gone on to win the league. United’s form is picking up however and the top 8 teams were again closer than in all but one of the previous 21 premier league seasons.

With that in mind we can’t rule out Liverpool, Everton and Spurs, who will also be hopeful of mounting a challenge. Liverpool are lacking defensively for me and some argue that Suarez can only turn it on against the smaller clubs. Everton with Martinez as manager have become masters of possession but keeping hold of Lukaku is imperative. Spurs have spent a lot of money but aren’t quite clicking into gear at the moment and I’m not sure Tim Sherwood is the man to change that.

Even though it’s very tight between the top 8 it is hard to see the champions coming from outside the current top 3. Despite the stats, I don’t think Arsenal will win it and that both Chelsea and Man City have greater strength in depth and are playing better. The market agrees with this and has City as favourites (2.24 on Betfair) but based on the stats alone you could definitely make a case for Arsenal being value at their current price of 5.8 on Betfair.

Chelsea are a similar price to Arsenal (5.3) but are playing better and are more likely to spend in January and I think a bet on them would be very good value and should trade much lower.

It’s good to see a title race that is pretty wide open and hopefully it can remain interesting right up to the finish.