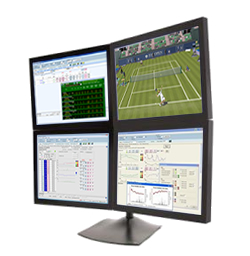 Making a profit from tennis betting is extremely difficult because pre-match odds are very easy to price up. You have 2 outcomes and with a built-in bookmaker margin or exchange commission you have to have constantly keep your eye on the tennis circuit to find a consistent edge.  The ones that do manage it won’t have returns much higher than 5% and 2 or 3 more likely. There are people who trade tennis in play however that do much better than this.

Locking in profits by backing and laying

Trading tennis is basically backing or laying a player on the exchanges (Betfair, Betdaq etc) and then betting on the reverse outcome at hopefully equivalent better odds to lock in a profit. So a simple example would be backing Nadal to beat Federer at 1.8 and then laying off at 1.3 after he has won a set and thus locking in a profit. You can level your profit by using Betfair’s cash out functionality but you can also play around with different levels of green on either side by using the whatif functionality. Some people prefer to make only a couple of bets as their trade for one match whereas some traders will enter the market on many occasions throughout a match.

Tennis has lots of odds fluctuations

We’ve discussed the pros of trading and in particular the commission benefits it provides but what else makes tennis so good for trading. Well there are plenty of odds fluctuations in the majority of matches.  The women’s matches (WTA) see a lot more wild fluctuations in general because there are more breaks of serve and we highly recommend trading on the women’s game. This isn’t to say that you will get on the right end of all these fluctuations but often even when you’ve made a bad entry point there will be another opportunity to make a profit or get out of the market for a smaller loss. The aim is simply to have many more winning trades that provide more profit than the losing ones.

Matches on nearly every day for 11 months of the year

Tennis is also great for trading because it’s on so often. There are tournaments played daily for 11 months of the year and it’s only really December that doesn’t see any tennis. After 11 months trading tennis you’ll find December is a much welcome break anyhow! So tennis is extremely well suited to trading and because of this liquidity (money available to win) in play is very good for the most part.

Accounts with Betfair, Bet365 and Pinnacle are best for Tennis Trading

Many of the tennis events are televised or at least streamed on the internet. Access to Eurosport and Sky Sports is obviously particularly useful. Betfair and Bet365 also show a lot of matches and accounts with these are a must if you trade tennis. Both have matches that the other doesn’t and Bet365 is particularly useful for Challenger events and has a greater range of different markets to bet on.

One other account that we highly recommend is that of the bookmaker Pinnacle Sports. They often beat Betfair (after commission) on many starting prices so if you are planning on an entry point at the start of the match and possibly not laying off then using Pinnacle Sports could be more beneficial. There is also the possibility of Betfair going down during a tennis match and it may not be possible to trade out with Betfair. Again using Pinnacle who have high limits would be a good option in this scenario.

Know your surfaces and make notes about players

There are lots of different tennis trading strategies that people like to attempt but no one strategy applied on every market is likely to bring you consistent profit. The markets are still pretty efficient in play but by learning how to read a match and anticipate what might happen will allow you to take advantage of prices based on models. Knowing  your surfaces and the differences between them is important for example. Not only are many players much better on some surfaces than others but some absolutely hate certain surfaces and show little motivation to do well on them. Andy Murray for example has pretty poor record on clay in relation to other surfaces but the markets always have plenty of faith in him despite this.

It’s also a good idea to make notes about players. Who is a strong server, who switches off for periods of a match and what do and what type of tennis do certain players find difficult to play against? OnCourt’s tennis software allows you to do this very easily and stores all your notes in a database so you can see them against each player when they are due to play. Access to software such as this or a website like tennis insight is highly recommended and well worth the money but they are not absolutely vital to do well from tennis trading. Simple stats like head to heads and serving statistics can be found for free on the internet but for convenience, more detailed stats and advice from other bettors these are a very useful resource to have.

Enter the market by laying low to keep liabilities small

In the tennis markets there are plenty of examples where a player’s odd’s goes very short and looks to have won only for the market to swing back again. This doesn’t happen all the time but if you can identify when this might happen it’s a very good way of building a small bank up into a larger one.

By laying a player at a short price your liability is very low and should the market move in your favour profits will be proportionally big. In contrast to this if you back short you need to stake a lot more to make the same kind of returns and this could leave you with sweaty palms. Because of the scoring system and individual nature of tennis it can be difficult to put a match to bed and examples of players failing to do so are common.

Entering near the potential end of a match more risky

We generally advise entering the market somewhere between midway through the first set and the first few games of the second.  Consistently entering too soon after it’s started and you will be betting close to start price which is not going to provide much value long term and leave it too late and the risk of losing your whole stake is much greater. This isn’t to say there aren’t great opportunities to trade near the end of matches as there are but they carry much greater risk and we prefer to already have a green book (in profit) before making these riskier trades.

Remember that Tennis Trading is not a guaranteed road to riches and is still gambling. Have a read of our 5 common trading mistakes before you get started.

Hopefully that’s given bettors/traders that might be new to trading and tennis trading in particular a decent insight and some food for thought. In the next couple of blog posts we’ll be reviewing the services of Dan from tennis ratings and we’ll also be looking at betting software such as Gruss and Bet Angel to automate your trading. This can be extremely useful especially when wanting to trade tournaments such as the upcoming US open where the matches are played at very awkward times for European traders.