As if we didn’t know already from the massive coat the Duchess of Sussex was wearing at Princess Eugenie’s Wedding (so the Mrs tells me) but it’s now official that Meghan and Harry are going to be having their first baby. It feels like the Royals are firing them out like one-o at the minute doesn’t it.

This kind of event is one of the rare occasions I can ask my wife for betting advice, other than reality TV shows and Eurovision maybe. Her record is pretty average on those but with Royal babies she does in fact have form. Following a dream she had in 2015, she confidently told me that Wills and Kate were going to have a girl and that she was certain they’d call her Charlotte. Unbelievably, this was before the birth and their announcement and she was right of course. This was enough to qualify her as a self-proclaimed royal correspondent.

Meghan and Harry’s first child is also going to be a girl I’m reliably informed. Most bookies haven’t got any names at odds under 10/1 which tells us that they don’t have the foggiest but Diana is amongst the front-runners at 12/1. Some cheeky buggers are trying to lay it as short as 6/1 though, ahem BetVictor. Princess Charlotte’s middle name is Diana and so it’s unlikely to be that. It’s never cool to copy your brother in any kind of way now is it.

The wife tells me that Harry and Meghan are likely to go for something a little less traditional and something very personal to them like a favourite place for instance. It won’t be anything boring like Alice (another 12/1 shot) I’m told.

Arthur (13/1) and James (16/1) head the field for boys names but we can lay those all day since it’s definitely going to be a girl.

It’s quite amusing going through the list of names and quite frankly accepting bets on the majority of them at any odds is a license to print money.

Winston is an interesting one. Not because it’s remotely likely but more because it’s a tempting one for punters to think they’ve joined the dots (stereotypically black name and our greatest prime minister) and part with their money. Skybet are 33s on that one with other bookies a more realistic 100/1.

Donald is a piss-takingly 500/1 for all those who might consider it bants to have a fiver on that and tweet about it.

In summary, Meghan and Harry’s first child is going to be a girl and is likely to be something non-traditional. Potentially one not even listed. So my tip is to keep you money in your pocket or stick it on the horses instead. 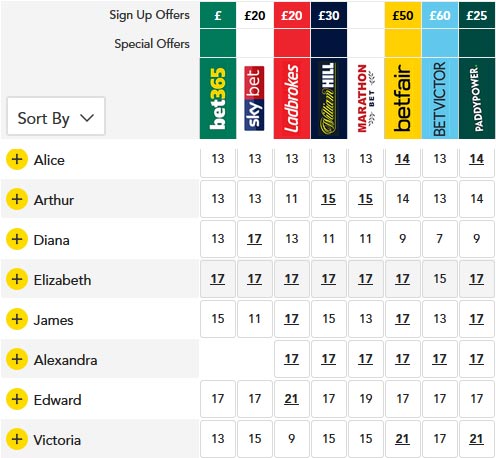