Roland on a roll! 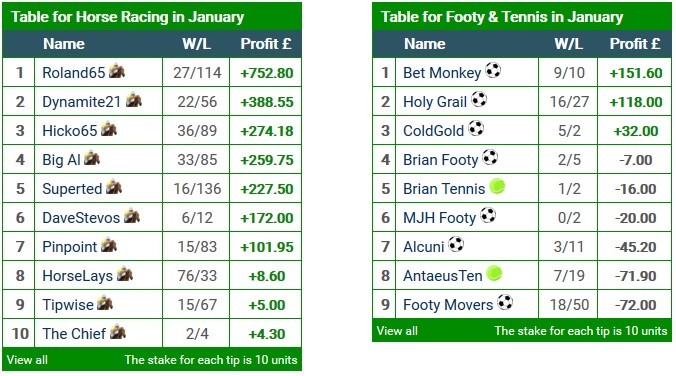 It  was a very slow start to 2017 for our BettingTools tipsters and half way through January things were looking very bleak. Perhaps those New Year hangovers were worse than we thought.  It didn’t look like the site was going to end up anywhere near in profit but we should have known better!

Some inspired tipping from Roland has seen him go from by far the worst tipster on the site to taking the Tipster Table for January with an impressive £752 to £10 stakes. I don’t think Roland will mind us saying that his results prior to this one were dreadful but it’s testament to his character that he kept trying to find value and providing reasoning for his selections. Hopefully he can continue his incredible form.

The change in fortunes was so surprising and his tipping so accurate that there are rumours that ‘Roland the film’ will soon be in production.

Dynamite returned to the table in January with a BANG and recorded his most profitable month to date (£388 to £10 stakes). He’d had the whole of December off to fine tune his methodologies and it’s paying dividends for him now and his reasoning has been excellent. He’s definitely one to follow over the next couple of months if you’re not already.

Many of the usual suspects kept the faith and managed to turn a profit in what was a difficult month at times and finishing in any kind of green is a huge achievement this month. Those that didn’t profit are the type to keep the faith and are savvy enough to know that consistency pays over the long-term. So fear not if you’re following anyone who didn’t turn a profit in January.

Variable staking options, were introduced late in January so we can get some data on how accurate those that like to work to operate a points system are. Obviously there’s little to go on at the moment but it’ll be great to see how this pans out for our first full month in February.

Thanks as always  to all of you for taking part in January and helping to make a miserable month in terms of weather much more enjoyable!