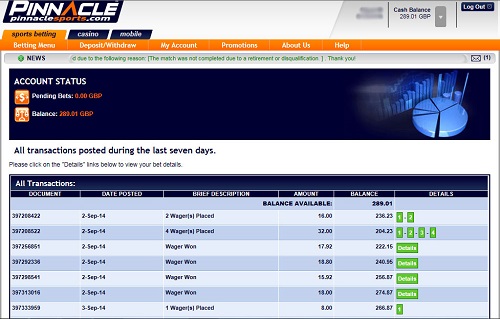 It been over 4 weeks since I last posted an update on the betting investment challenge. Things had started to get back on track the last time I posted but then the losses came again. It may seem like I’d given up due to the lacklustre start and the lack of updates but I kept plugging away and stayed in the game but only just.

My initial investment was £364.20 split between 3 bookies to later become 2 for ease. After depleting to £250 and then making a comeback to back over £300 the losses returned and little more than 2 weeks ago my total had gone down to less than £150, with £100 in my Pinnacle Sports account and £50 at Betfair.

I knew that the bets I’d been making at Pinnacle were in a bad spell of variance and was confident it would turn around but I was so frustrated with my poor trading efforts on Betfair. I’d actually decided to knock that on the head and withdrew £30, leaving just £20 to play with for the US open Tennis Tournament. I never planned to quit completely but to continue with the betting only over at Pinnacle since most of the best prices (after commission) were available with them anyway.

Well today I can report that the current bank now stands at £470! That’s over £100 profit. £150 of this came from my big US open win but my Pinnacle account is now back up to £300 too. Yes, I’ve had a bit of luck but luck usually comes if you’re patient enough and you keep trying to find value. Here are the key reasons for me finally getting back into profit:

-BettingResource is a source of most of my bets and I was confident they’d return to profit. My premier league value bets have also seen some very big wins recently. I backed Stoke to beat Man City and a couple of other decent prices in the last round of prem games. Again, in the short-term a little lucky but long-term my value bets will come good and they are proven taking 2nd place in Cassini’s FTL league last year.

Big win from US open:

-My own bet on Cilic may seem a bit lucky but I’ve gone through the draw in 3 tennis grand slams and made big money by backing huge value prices. Even if Cilic and Nishikori hadn’t made the final I’d have still made a nice profit considering the small stakes.

I would have made more money had I not reduced liabilities and locked in profits on other players at the semi- final stage. Although this seems disappointing and not a great advert for trading, it is also what I did when I made a huge pre-tournament bet on Cibulkova and locked in a £400+ profit despite her losing the Australian Open final.

Unbelievably, going through the draw meticulously had not been something I’d done before and I can’t recommend it enough if you’re trying to find big value bets in tournaments.

Stakes small enough to stay in the game

-I’d deliberately made sure my stakes allowed me to handle losing streaks. I have to say this felt like a close call though and perhaps my percentage which is around 2% was actually a bit big for the number of bets I was making. My trading stakes were definitely too also but I felt that I generally just about kept things low enough to ride the storm and wait for the variance and luck to return.

Working out how many tipsters to follow is difficult. At the start I wanted to follow anyone making a profit as I believed the more turnover the better. However, not only does this become a logistical nightmare but it also waters down your profits. You end up taking a lot of bets that probably aren’t value and many of the tipsters in profit had simply backed a few bets with very big value with the rest either at correct prices or slightly lower than they should be.

At the end of the day market prices do have a built-in overround albeit a very small one with the books I use but it still exists. I am now much more selective and follow only a handful of proven tipsters including my own premier league value selections.

The big win on the US open has somewhat masked my overall poor performance trading on Betfair but I am still mindful that I need to rethink my strategy on there. There’s been a lot of talk in the blogosphere about in play markets being overrun by courtsiders more than ever before and that it’s now near on possible to make in play pay. Whilst I don’t agree with this entirely, I do agree that since the arrival of the cross matcher and the increased number of courtsiders it’s much more difficult to continually get matched at value prices.

The more you bet in play the more likely you are taking poor value but position taking for big profits is still possible. The problem with this is that you have to be very patient and selective and get through a lot more matches to wait for a good time to strike. Betting on so many markets doesn’t fit with my lifestyle now and so I’ve ruled out this kind of trading.

I will continue to do some trading but by backing big prices pre-tournament and pre-match and then look to trade out to lock in profits. I have seen a smaller number of matches where pre-match prices are of clear value to me and the fluctuation in tennis markets being what they are, I’ve been able to lock in a profit pretty easily on most matches. This seems to work much better for me with a pre-match entry point compared with looking for both entry and exit points in play.

So overall, I’m betting much less, being patient and making sure I stay in the game as well as continuing to attempt to price things up accurately. My biggest mistake before was trying to follow too many tipsters and trade too many markets. Diversification is good but there’s comes a point where it will have less of an effect and eventually a negative one.

I’m now at a point where I can increase my stakes a little. I am going to be cautious however. Having reduced my betting activity, I don’t think I’ll see such bad runs but I’m happy to be in good profit now and to see how it goes for a while.