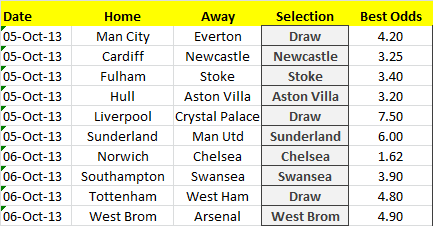 A profit of 37 units on the prem last week using the value finder spreadsheet to produce my own odds. That made the month of September a profitable one of 34.40 units overall and an ROI of 11.47%. the updated Spreadsheet and info about it can be found on this page.The West Brom result did much to influence that but that’s what finding value is about and if it hadn’t been that match we cashed in on it will be another. There’s a long way to go of course but it’s a decent start.

I’ve inputted my selections for this weekend and it’s thrown up some interesting selections indeed, including 4 draws!

It all starts at Mid-day at Eastlands with Man City taking on Everton. Joe Hart has come under scrutiny yet again and I read a comment on twitter in the week that said “Joe Hart is the most over-rated palyers around. Which begs the question who still rates him THAT highly.” A very good question indeed. Man City have dominated premier league matches in terms of possession and should come out on top in this one but I have the value with the draw at a bets price of 4.2. Everton were struggling for goals but Lukaku has changed all that and shows what a difference a goal scorer can make to a team. That said, I expect City to keep him quiet tomorrow (Joe Hart blunder exempt).

I was very surprised at Cardiff’s win at Fulham last week and as they tend to be better at home they have a good chance against the unpredictable Newcastle. The Magpies started slowly against Everton last Monday but looked a different team when Cabaye came on and odds of over 2-1 I think they’re a decent price.

Fulham v Stoke is a tough match to call much like Stoke’s match with Norwich last week, I see almost anything possible and have to go with the result that provides the best odds which is the Potters to win. Hughes will certainly be keen to get his team fired up again after last week’s dismal display.

Aston Villa were lucky against Man City last week but they’re pretty impressive away from home and Hull haven’t been without their luck too. I seem to be underrating Hull at the minute and the spread sheet tells me Villa are the bet based on my estimates.  Aston Villa are without Benteke again but they were last week and could also welcome back Agbonlahor.

Liverpool v Palace looks a nailed on home win but I can’t make Liverpool more than 80% likely to win this match (or any for that matter!) so the draw is the best value selection for me here at a massive 7.5. Sturridge and Suarez are likely to cause havoc in the Palace defence and ass the value here is extremely small I wouldn’t blame you for leaving this one out.

Sunderland are still without a permanent manager but caretaker manager Kevin Ball got a spirited performance from his players last week. Man Utd look for from convincing and have had a very poor start to the season and are without Ferdinand for this one. Sunderland winning this one wouldn’t be a huge surprise to me and odds of 5-1 look worth a nibble.

On to Sunday where Norwich take on Chelsea at Carrow Road. Norwich have won only once at home so far this season and they were made to look good in last week’s bore fest with Stoke. Chelsea are without Torres and possibly Hazard but a Chelsea win looks a near certainty in this one.

Southampton have had a very good start but odds of nearly 3-1 on an excellent Swansea side is too big for me. Swansea are having to deal with games coming thick and fast but they’re just about coping so far.

West Ham are yet to get their campaign going and had a disappointing loss against Hull last week. They’re still without Andy Carroll and face a tough task against an in form Spurs. Tottenham have great depth in their squad this season and despite me wanting to back them in this one, the spread sheet tells me that the draw at 4.8 is a big price.

Finally, if Arsenal do the business against West Brom on Sunday then they will have won a record breaking 9 away matches in a row. Their good form has continued despite being without Theo Walcott, Alex Oxlade-Chamberlain and Lukas Podolski and a baggies team full of confidence could spring another surprise and the price of 4-1 of them doing so looks fair.

Bet of the weekend Swansea +0.5 to beat Southampton in the Asian Handicap market with Bet365.