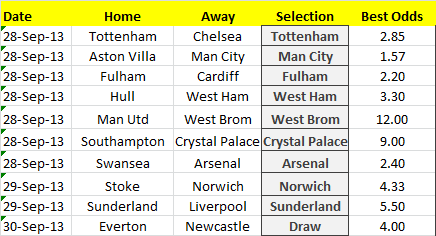 A disappointing week last week which now puts my prem bets from value finder spreadsheet on -52.90 units. The 2 wins out of 10 came from Swansea and Spurs and my advice to back both with your money almost returned proved much better than my tip of the weekend on United! I was very impressed with Man City and they’re still the team that’s had the most possession so far in the Premier League and I think they are worth lumping on against Villa this weekend. A few results could have gone our way quite easily with Liverpool losing rather than drawing and Newcastle throwing away a 2-1 lead and these two results alone could have been the difference between a profit and a loss.

It’s a good idea to reflect and take lessons from the previous week’s bets and in truth I am pleased with most of them. Hull were pretty fortunate to beat Newcastle in my opinion. The goals were pretty low percentage type of goals and I can still see them struggling. The draw on both Everton and Liverpool were value plays with both games ending in narrow wins and Tottenham and Swansea both showed their class. Arsenal were pretty dominant as expected but I couldn’t back them at 1.36 so I was also happy with the Stoke play there.

I was a bit unlucky with the Villa match with Norwich missing an early penalty but Villa win away again and I perhaps have to acknowledge their away prowess a little more. Sunderland were awful and I definitely overestimated that one but they have a lot of talent in their squad so I won’t be writing then off completely yet. The biggest mistake I made last week was the united one of course with the Red Devils getting smashed (No, not in that way Richard Keys) 4-1. United just couldn’t compete with City possession wise and their midfield was completely overpowered.

United had an unconvincing win against Liverpool in the Carling Cup on Wednesday and I think it’ll be impossible to retain the Premier League with their current squad. Rooney looks rejuvenated and is rumoured to be donning a gastric band as well as the one on his head and with Van Persie beside him they will get goals but the midfield looks very average indeed.

Onto this week then and it all starts with Tottenham v Chelsea at Lunchtime on Saturday. Tottenham have been much more impressive than Chelsea so far and although it’s a tough one to call I make Spurs favourites to win this. Both are struggling for goals in the league but Spurs are firing them in in the cup competitions and are creating lots of chances in every game. I really do think Man City are a banker away at Villa who are without Christian Bentekkers are poor at home. City banged in 5 in mid-week and the team is really starting to gel again under Pellegrini.

I see a straightforward win for West Ham who welcome back Stewart Downing and Fulham look a reasonable price to beat Cardiff at home. I would expect Man Utd who could have the Prem’s MVP, RVP back in the side again to brush West Brom aside but the sheet tells me that 1.3 is too short based on my percentage estimations. This makes sense really as United have been far from convincing so far and I’m not sure they warrant such a low price so early in the season.

I find it a bit odd to see Southampton so low at 1.5 against Crystal Palace. Perhaps I’m paying too much attention to the name and less so to their form and the fact that they beat Liverpool last week. It was only a few weeks agao they lost away at Norwich and they only managed a draw with Sunderland and 9.0s on Palace is where the sheet tells me I think the value is. Arsenal are flying right now and 2.4 against Swansea has to be snapped up. The Swans lost in mid-week to Birmingham in the Capital One Cup and although they did makes lots of changes I can see the amount of games they’ve had to prepare for and play starting to take its toll.

I feel anything could happen in the early Sunday match between Stoke and Norwich. The likely result is obviously the home win but I see a touch of value on the Canaries. Sunderland still without a manager are without Steven Fletcher who has a shoulder problem and Borini is ineligible to play against his parent club. They look like they will struggle against Liverpool who welcome back Suarez and who looked sharp in mid-week. The sheet tells me that 5.5 is a big price on the home team however and stranger things have happened!

Finally Everton v Newcastle looks like a home win on paper but Newcastle are a very unpredictable side with a lot of talent and Everton, aside from Leyton ‘left foot’ Baines aren’t really firing in the goals. A I said earlier, Hull were fortunate to beat the Magpies last week and that loss was their first for 4 matches when they were hammered by Man City. I think the draw is a good price at 4.0s on this one on Monday night.

Bet of the weekend – Arsenal to beat Swansea at 2.4 with William Hill