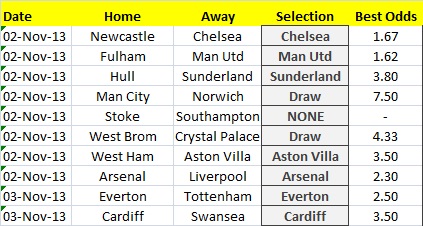 October was a disappointing month for my Premier league selections generated using my own knowledge and the value finder Spreadsheet. It means we are at a slight loss overall but it’s early days.

The biggest lesson of the last few weeks had been the form of Southampton. They continued their excellent run with a majestic 2-0 win against Fulham and I’ve definitely been underestimating them somewhat.

I’ve also been underestimating Hull but I’m sticking with opposing them for now and I think Sunderland are a decent price to beat them this weekend. New manager Poyet might be happy with a draw and taking the draw no bet is my bet of the weekend.

The pick of this weekend’s games are the matches between Arsenal and Liverpool and Everton V Spurs. Both of these matches are difficult to call but the better sides are both at home in my opinion and with home support I have to side with Arsenal and Everton.

I’ve apparently priced one match identically to the bookies this week in the Stoke v Southampton game. Hopefully this means I’m finally seeing the light when it comes to the Saints.

Finally, it’s going to be interesting to see whether Man City  manager Pelligrini remains faithful to Joe Hart for this weekend’s match at home to Norwich, after he made yet another mistake last time out against Chelsea. Hart was replaced by Romanian Pantilimon for the league cup match in mid-week and he kept a clean sheet and made a number of good saves. I personally think Hart has had more than enough chances now.

Bet of the weekend – Sunderland Draw No bet to beat Hull at 2.7 with BetVictor