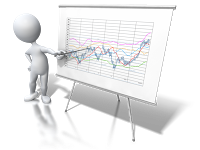 *Firstly, I hvave just realised that the links to my spreadsheets on the site are not working and I’m currently working with my webhosts to get this sorted. Should be sorted before the end of the day.

Whilst I’m obviously delighted that I have managed to profit so much with my prem selections recently, I wanted to try and understand why I have been able to do so. When you consider I’ have placing bets on virtually every game in the world’s most popular league in markets that are slightly overround, to get a return of 27.59% after 136 games looks impossible. So do I possess natural psychic skills comparable to that of Paul the Octopus or are the Premier League results different to that of previous seasons and causing havoc for the odds compilers? Here’s what I found:
Season 2009/10 and 2010/11 Stats compared with this season so far:
As you can see there have been a lot more away wins than we would normally expect to see and also a few less draws. This would go some way to explaining my success, since I rarely price up the draw higher than what is offered and when I have I’ve had big wins due the huge prices offered. Most of my bets end up being on the higher priced away sides too so the overachievement of these has helped me a lot. This mixed in with my ability to spot a short price that deserves to be short has meant I have been able to beat the odds. (Basically the top teams v Wolves!)
So will this continue for the last few games or will we see the overall trends converging towards the average? Well the sample size of 380 games for Premier League matches each season is a very small one so there are certainly no guarantees but my guess is that the number of away wins will go down. I can only see it has one way to go from 30% and last week we saw no away wins whatsoever on the Saturday, though we did see West Brom and Man City win on the Sunday.
Last 34 Games of 2009/10 and 2010/11 and this season so far:
There are 34 games to go and the above shows how the percentages compare for the last 34 games of the season. Compare that with the first table and what we can see is that the number of home wins is usually greater and even though this was only slightly greater during the 34 games of last season, with the current home win % only 44% I definitely see this going only one way too. Crowds are probably bigger and more passionate at this time of the season and perhaps this adds to the home advantage. The away wins also seem to increase but as I have already said I can’t see it increasing from 30%. The number of draws seems to go down at this time of year but as this figure is lower than usual I would expect it to increase a little. So in summary it looks like the last few games will probably result in definitely more home wins, slightly more draws and definitely less away wins!

Here are this weeks selections followed by the updated monthly profit/loss summary. There was just one game to add from the last update which was the win for Bolton.