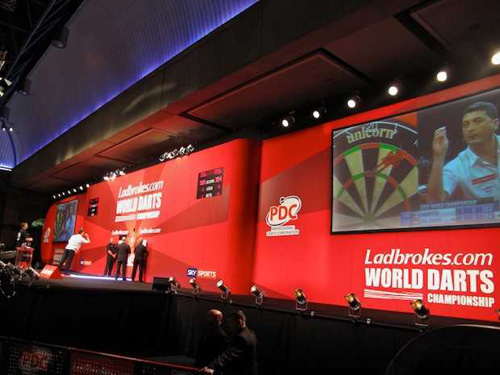 Christmas just wouldn’t be Christmas for me without the Darts action from the Ally Pally. It all starts this Friday, the 13th December and as this is a knockout competition it will indeed be unlucky for some.

The World Championships has been dominated by Phil Taylor for the last 46 years. Ok, not quite but he has won 16 times out of the last 24! This also includes last year’s win over Michael Van Gerwen. Taylor was 4-2 down but came back to win 7-4 and it again emphasised just how difficult it is to beat Taylor in this long format.

If everyone brings their A game then the winner can only come from 3 players: Phil ‘The Power’ Taylor, ‘Mighty’ Michael Van Gerwen and Adrian ‘Jackpot’ Lewis.

Taylor’s 16 World Championships also include wins in 3 out of the last 5. He’s had another good year winning a 5th UK Open, a 14th World Matchplay, 11th World Grand Prix and 5th Grand Slam of darts. His form has got better as the year has progressed and he seems to have peaked at the right time as is often the case.

The draw has been very kind to Taylor too with Van Gerwen, Lewis, Barneveld, Wade and Anderson all in the opposing half. It would be almost unthinkable for Taylor not to make the final.

Lewis has won the title twice but is also the most inconsistent of the ‘big 3’. He still seems to be in awe of Taylor and with the two now back to being best buds again in recent years Lewis is much less threatening to Taylor. The two even practiced together before the recent semi-final in the Grand Slam of Darts. It’s almost as if he doesn’t dare to beat Taylor at times.

MVG is yet to win this title and as already mentioned came desperately close last year. He will certainly have the desire but last year’s defeat was brutal and whether he has the belief is another matter. Both Lewis and Van Gerwen will be hoping that Taylor gets beat in the early rounds where the format is slightly shorter and upsets are more likely.

Remember that the Championships takes a break over Christmas and resumes the day after boxing day. The full schedule is below.

Brothers Kim and Ronnie Huybrechts cruelly have to face each other in round 1. Kim is the better and more experienced player and beat older brother Ronnie in the Grand Slam of Darts quarter-finals only last month.

Gary Anderson plays 2005 finalist Mark Dudbridge. I’ve not seen Dudbridge play for a while but he’s a very capable player and Anderson can have very bad days on the doubles.

Darts Facts and things to look out for

-Look out for Kim Huybrechts’ wife in the audience. She is fit. Don’t worry, you won’t need to look closely as the cameraman will look to switch to her as much as possible.

-James Wade used to date Helen Chamberlain from Soccer AM and is now dating one of the walk on girls. Lucky Bar steward.

-Paul Nicholson has a very interesting accent for an Australian.

-9 darters are ever more frequent but people will still bring up the 9 darter/147 is snooker debate.

2 brilliant darts sites we really recommend are Darts Database for all your stats and head to heads and also Live Darts Data. This is useful  if you can’t watch the action for any reason or need to keep tabs on 180s and averages.

Darts can be good to trade in-play but make sure you use a third party program like Gruss, Bet Angel or Geek’s Toy that has fast refresh rates. The price movements are fast and brutal and you’ll be destined to take poor value using Betfair itself. I’d also advise taking trading positions during breaks or where there’s a decent pause in play.

Taylor should make the final but 1.9 doesn’t offer much value and his price can’t go much shorter until the final. So if you’re going to back him do so after he’s been sure to avoid any shocks in the shorter, early rounds.

In terms of value, I like Michael Van Gerwen at 5.0s. He nearly had Taylor last year and I think he has the mental strength to go one better. He’s won half of his meetings with Taylor this year including 2 out of the last 3.

In fact you’d be silly to bet against MVG at any stage not least because of how good he is but also because his celebratory fist pump and facial expression after he hits a 180 will drive you crazy.

I also think James Wade is a decent each way bet at 34.0. He’s troubled Taylor in the past and has played some good stuff this year. He could also provide a good back to lay opportunity.

The darts really is great viewing so don’t knock it til you’ve tried it! If you’re on twitter also makes sure you follow prolific darts tweeter @DinkyRach for excellent darts related banter.