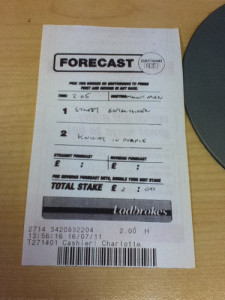 Coral failed to pay out winnings of nearly £10,000 for a winning accumulator placed on the World Cup Qualifiers last Tuesday, the 10th September 2014. The trio of bets was for France, Serbia and Argentina to score 3 or more goals which they duly did. The man who placed the bet, Oshane Grant from Bristol said he had more than his usual stake on and placed £100 on this bet. He therefore knew the odds was out of line with the norm but isn’t that what we are looking for when we hope to profit from a bet? Incidentally Oshane is unemployed and perhaps this raises more important questions!

Bookmakers do reserve the right to void bets that are “palpable errors” which basically means an obvious mistake and Coral have therefore acted within their terms and conditions. They admitted that a clerk had mistakenly given him the odds of the three teams all scoring four or more goals – rather than three.

The odds here were wrong but it’s not uncommon for bookmakers to offer stand out prices that are higher than the rest of the market to attract money. So when does it become a palpable error? Is it also only if it wins? I wonder how you’d get on if you placed one of these bets for it to lose and then tried to claim that the odds on the bet were wrong so the bet should be voided.

Punters don’t have the luxury of claiming palpable errors, even when an extra 0 is added to a slip online or we’ve accidentally hit the lay button instead of back and is it fair that bookmakers should have this kind of insurance?

Coral did pay Oshane what they believed were the best odds elsewhere in the market and this came to £1,216.67. So we are only talking about a difference of £8,000 here. Small change to bookmakers and it could do them more harm than good in terms of trust and negative publicity.

If bookies like Paddy Power can afford to pay out bets that haven’t actually won yet they must believe that it benefits their reputation and results in customer loyalty. Obviously if Coral had just paid out straight away there wouldn’t have been any publicity but if they had then decided to reverse the decision a day or two later that might have benefited them long-term.

Perhaps Paddy Power could have honoured the bet on behalf of Coral, now that would have been a great PR stunt!