Following on from my last blog post titled “what do pro punters/sharp bet on?” it has been pointed out that the statistic of 2.4 goals scored on average in the Premier League is incorrect. The stat was found in a Pinnacle Resources article and it’s not the only stat that appears to be incorrect in it.

Cassini has since calculated the actual averages per season and I have checked them against my own databases and they tally.  I can now confirm that the actual goals per game average overall since 1993/94 in the Premier League is 2.65 goals. As you can see below, the averages have been increasing and this doesn’t help explain why I have been seeing so many matches that are odds on for the under 2.5 golas and that are odds against for over 2.5 goals.

Of course, just looking at the average goals isn’t the full story as some matches will have 4, 5 or even more goals for example. They push the average up but will still only count as one match that finished over 2.5 goals. So I decided to get the stats for how many matches finish above 2.5 goals which again you can see below. The overall % of matches that finish above 2.5 goals is 49% and this does make a little more sense but again it looks like this percentage has been increasing over the last few seasons. Is this because pitches are bigger, surfaces are better or balls lighter? Who knows, but thes stats certainly look like more of a trend than opposed to being just variance.

Indeed Cassini revealed that blindly backing the overs since  the beginning of the 2015/16 season would have produced a yield of 5%. Narrow the criteria down to only matches where the odds are between 2.00 and 2.5 and the ROI is 8.5% . So much for the value being on the unders and there being a bias towards over 2.5 goals. Will there now be an over reaction to these findings? Perhaps we’ll soon see the markets correct themselves or even over-compensate with value now actually being on the unders!

At the risk of stating the obvious, if there’s one thing that is clear from all this, it’s that whether it’s the unders or overs that you are looking to back, you need to be finding odds of over 2.00 to show a profit long-term.

Number of English Premier League Matches that finish with over 2.5 goals 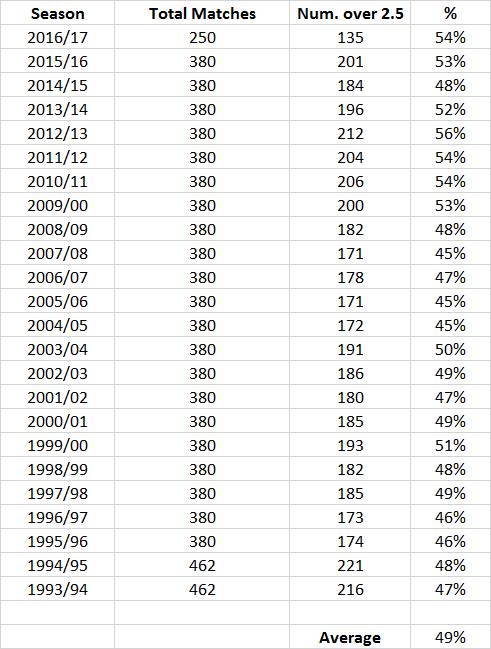