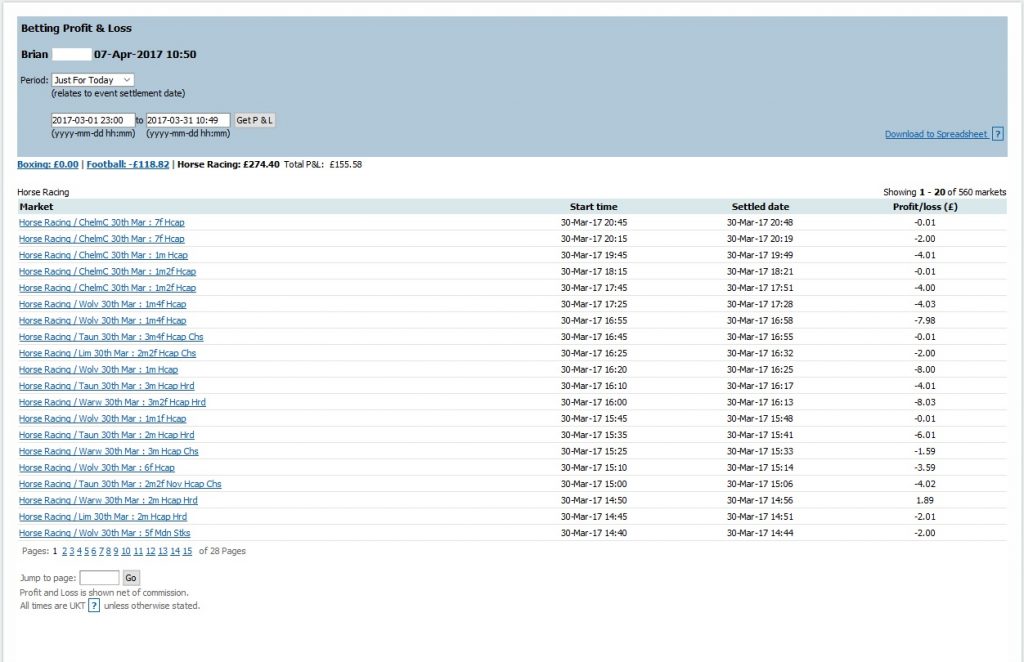 March was another profitable month for me on Betfair. Not as good as the month before however and there’s a few reasons for this:

Stakes were still only £2 last month and I wrote recently about how the ROI on £2 bets is always likely to be the highest. There’s a greater chance that when you increase stakes you get more matched when your wrong i.e the price isn’t value and less when you are right (is value). That said there is still likely to be a point between £2 and say £100 per bet where actual profitability is the highest. Despite last months somewhat unimpressive profits, I’m confident enough to increase my stakes a little in order to try to increase my profit. The tweaks above and the absence of Cheltenham (although Aintree is here instead!) should be enough to improve upon last month hopefully.

You have to be very careful when increasing stakes as sods law could see you get off to a bad start and wipe out a hell of a lot of previous work. It’s never a good idea to increase stakes and hope for a good start. Your stake should still be a reasonable percentage of your funds that can withstand a terrible start and you’ll need to be able to cope with such a bad start mentally, as hard as it may be.

Captain Webb, the first man to swim the English Channel famously increased the stakes on what he thought he could achieve and after the swim of the Channel, his next attempted but fatal swim was to take on Niagra Falls. Webb is a name present in my family history and older generations have said we were related. It’s been very difficult to prove though, even using Ancestry.com and Webb seems to be an appropriate name for his family tree. It wouldn’t surprise me if we were related. An insatiable determination, both of us seem to think we can take on the world at times even when the odds are stacked against us and gambling of course appears to run in the genes. His tale has at least made me a little more cautious.