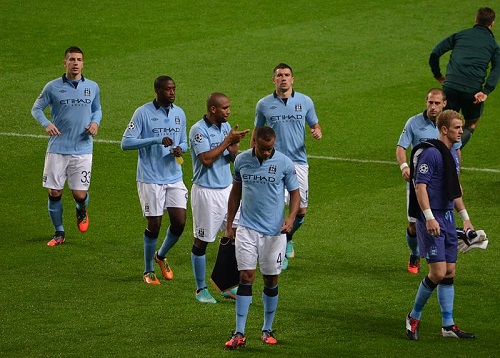 Last season’s Champion’s Man City host last season’s runners up Liverpool in what should hopefully be yet another mouth watering clash.

Both teams won their opening matches, City comfortable winners at Newcastle with Liverpool a bit fortunate to record the points at home to Southampton last week.

City look very settled these days under Pelligrini and are boosted by the 4 year contract extension that Edin Dzeko has just signed and he join players such as Samir Nasri, Sergio Aguero, Vincent Kompany and David Silva in pledging their long-term futures to the club.

Liverpool will of course miss Luis Suarez but their squad is still full of quality with a trio of signings from new feeder club Southampton! Daniel Sturridge looks set to carry on where he left off last season after he bagged the winner against the Saints. Liverpool have confirmed the signing of Mario Balotelli but he is unlikely to feature.

City’s pre-season started off well, winning 4 out of their first 5 albeit against mainly unchallenging opposition. They were pipped by both Liverpool and Olympiakos in extra time in their last 2 friendlies and were beaten 3-0 by Arsenal in the Community Shield. They made a lot of changes for the matches though and bare much less importance than their 2-0 away victory on opening day.

Liverpool had a decent pre-season and capped it off with a very impressive 4-0 victory against Dortmund. Pre-season results count for little however and last week’s match against Southampton may give us more clues about how Liverpool will fair this season.

Worryingly the Saints who have lost a big part of their team to Liverpool managed to create a lot of chances against Liverpool and were extremely unfortunate to come away from Anfield with nothing. Liverpool’s defence does not look as strong as City’s. Centre back Dejan Lovren may take time to settle with Skrtel as will new full backs Alberto Moreno and on-loan Javi Manquillo.

Yaya Toure was the stand out player of the Premier League last season and is the most important player in the City squad. He is good defensively but importantly gives City that extra creativity and urgency in their build up play along with one other important contribution, goals. He notched 20 times in 35 league matches last season and although it’ll be tough for him to have a season as good as last but you certainly wouldn’t bet against it.

Sturridge really came of age last season and with Suarez now gone, Liverpool will need him to have a season as good as last. He is the Premier League striker with the most goals in 2014, scoring a couple more than both Suarez and Dzeko. He’s definitely capable of scoring against City but I think Komapny and co will be well prepared and could keep the Liverpool marksman at bay.

Key Stat: City won an incredible 17 out of 19 league matches at home last season, losing only once. City look just as strong if not stronger whereas Liverpool are arguably weaker without Suarez.

Manchester City are also unbeaten in their last five home league meetings with Liverpool and that unbeaten run looks set to continue tomorrow. Brendan Rodgers would take a point at the Etihad but I don’t think Liverpool can keep a clean sheet against City and a narrow victory for the Blues looks likely.

City were actually a shorter price to win this fixture last season and I definitely see value in the current price of 1.87. So take it before it shortens.

This fixture has seen lots of goals in recent times with 3 of the last five meetings finishing 2-2 and there’s no reason why this one shouldn’t have plenty of goals too.

You can also get a risk free £50 in play bet with Bet365 so don’t miss out on that either. Just place a £50 bet (or less, minimum £10) before the match kicks off and then place a £50 bet (or the same amount as the pre-match bet) in play. You’ll get your in play stake back if it loses and if it wins, happy days.