Interview with the Football Analyst – Part 1

Graeme aka ‘The Football Analyst’ is the owner of several very profitable football betting systems. His systems have been proofed by the Secret Betting Club from whom he has received a number of awards.

We wanted to find out more about him and his systems and why there are so many! We tried to get him to give short and concise answers but readers of his blog will know that he does get carried away! Nevertheless, it’s an informative and insightful read so thanks Graeme.

The progress of his systems is documented on Graeme’s blog http://the-football-analyst.blogspot.co.uk/

1)      Tell us more about The Football Analyst. Who is he and who does he support?!

I’m a 32 year old guy, living in Scotland and I finally got married to my childhood sweetheart a couple of years go. I wouldn’t class myself as a massive football fan although I was more of an avid football fan when I was younger. I support my local team Dundee FC (that’s not the horrible ‘United’ who play across the road in tangerine tops!) and we are currently joint top of the Championship. Dundee were relegated from the SPL last season although since I have been going to the games from an early age, we’ve spent more time in division one (now the Championship) than the top league, so I’m used to seeing us challenging (and failing!) for promotion most seasons!

2)      You indicate on your blog that betting is not your full-time job. What is the day job?

I work in the insurance industry for a large insurer and I manage a team of pricing/actuarial analysts. It’s always difficult to explain what I do on a day-to-day basis but my whole working life is now carried out in Excel or other analytical software packages. I’m very fortunate in the sense I love my job and I couldn’t see myself doing anything different from what I do now. I started off in the team as an assistant analyst in 2004 when I graduated with a first class honours in financial economics from university. I’ve quickly worked my way up and hopefully I can continue to progress my career into the future.

3)      How long have you been betting and how did you first become interested in it?

I’ll try to keep this short as every time I answer this question, it usually takes about 1,000 words!

Like so many, I was educated at this game by my Grandfather. He was betting every day on the racing and I was a bit of a child prodigy when it came to numbers. I used to count up horseracing multiple bets by way of homework at the age of 5! By the age of 6-7, I was able to add, subtract, multiply and divide any large numbers and therefore, I was always working on a Maths curriculum far in advance of my years at primary school.

My Grandad used to give me 50p every day to bet – thinking back, I was quite creative with my multiple bets! – and therefore, I was hit with the racing bug very young. I was placing bets in the local bookmakers by the age of 14 and everyone in the bookmakers knew me by my first name. My 50p soon graduated to £1 and then £2 and I was basically betting every day when I was growing up.  Came close once to a massive win but we can keep that story for another day!

When I went to university, money was always on the tight side and if it wasn’t for a few nice wins betting, I would have been eating baked beans on toast more often than I was!

When my then girlfriend (now wife) and I started our careers, we purchased a big 4 bedroom house which really stretched us financially (everyone said it was a great investment!) and it was at the start of 2008 that I opened my first online bookmaking account, a Betfair account. Before then, although I was still betting on the racing at weekends and was always a massive fan of Cheltenham etc. I wasn’t realty much of a gambler though and since I had grown up around bookmakers, placing bets online had never really been a consideration.

I placed my first online bet (was meant to be a trade!) in March 2008 and I’m coming up for my 6th year online betting anniversary soon.

4)      Are there any other sports other than football you like to bet on? Do you have an edge in these?

Not surprisingly, my first 18 months or so betting and trading online was centred around horseracing and I would say I had created myself a little niche using my knowledge of reading form to gain an edge from trading pre-race and leaving IR lays on Betfair. However, time was a major issue for me and with working full-time, trading on Betfair was never going to work long-term. The introduction of the first premium charge was the final nail for me really and I turned my attention to trying to use my skills I have developed in my career to develop an edge on the football markets.

I stopped using Betfair as a result of the first premium charge hitting me and although I’ve done the odd IR trade on a few of my football bets over the last 4 years, I don’t use Betfair as a serious betting option now at all. 70% of my betting is done through Pinnacle now who are the number one footballing bookmaker and aren’t afraid to take a bet and don’t restrict me for winning.

6)      How long have you run your football analyst tipping service?

The service started as a subscription service for the season 2010/11 although all bets for the first season were also posted in advance on my blog. The service is now into its 4th season and has grown season on season. I capped membership places at 100 for the season past and the service was fully subscribed in the early summer. If I had kept the service open until the season started, going by the number of people I turned away, I could have filled 200-300 places easily.

7)      Why do you have so many different systems and why are they named the way they are named?

This is a question that is posed to me every season!

If I go back to the very beginning, my idea was to develop one football system. It’s hard to believe now but when I downloaded the data for historical seasons in January 2010, the intention was to build one algorithm whereby, I would back every team thrown up as value whereby my odds were different from the bookmaker’s odds.  It was meant to be simple!

As you will know yourself Brian, building a ratings algorithm isn’t easy and therefore, I encountered lots of issues and my thinking changed lots over the first few months. I read lots on ways to build algorithms, which factors to use, how to use Poisson distributions and so on. After a few months playing with data, I had my first ratings algorithm built.

I then decided that having an algorithm which threw up different prices than bookmakers for all games wasn’t as useful as I thought it would be. For a start, it would mean I would be betting on nearly every game in every league every week! That’s a lot of bets.

My thinking then changed and I went down the route of using my rating factors to develop systems based on set criteria. I built 10 systems from algorithm one based on set rules and odds bandings (e.g. no home bets less than 1.80).

I finally went down the route of testing out results and doing some basic statistical tests on the 5 systems and unfortunately, I decided that I’d probably back fitted the systems to the extreme and therefore, the systems would all be flawed. I took the decision to ditch these 5 systems before they even had a live bet!

I then set out developing a new algorithm (now called algorithm one) and followed the exact same procedure outlined above to come up with 5 systems.  These systems were systems 6,7,8,9 and 10. System 6 being all teams that appeared at least once on the 10 systems based on the ratings. System 10 being teams at appeared the maximum 5 times on the base systems.

When I was very happy with systems 6-10, I had my first systems built. I then decided that since I had got the bug for building algorithms, I would have another go and build another set of systems from a second algorithm. These systems became systems 21, 22, 23, 24 and 25.

The obvious thing to look at next was what happened when teams appeared on system 6 and 21 or 6 and 22 and so on. Hence, I looked at all the returns of the combined systems from each algorithm.

One other thing I should point out here is that systems 9, 10, 23, 24 and 25 were all dropped as they didn’t produce enough bets. I think system 10 was producing less than 10 bets a season if I remember.

After a very successful first season, I decided I wanted even more systems and I developed a 3rd algorithm which threw up systems 31, 32 and 33.  I also decided it would be good to have a little batch of systems (called Miscellaneous Systems) which became systems 21-31, 6-21-31 and 6-32. I also developed 3 systems using a different approach to my other ratings and these became systems TOX, STOY and STOZ.  Hence, I now had 6 miscellaneous systems. I also developed 2 other systems this summer, an Under 2.5 goal system and an Over 2.5 goal system.

Hopefully everyone is still following!

Apart from the Euro Systems, it was a very successful season last season again.

Sum all these systems up and you get 52 live systems that I’m running this season. Phew…..

8)      Can you give an overview of the returns by system and by season if that’s possible?

Well, the first live season was season 2010/11 and I had the 11 Established Systems in operation. The systems started the season off well but the second half of the season was much tougher. Even so, the overall results at the end of the season were pretty good. 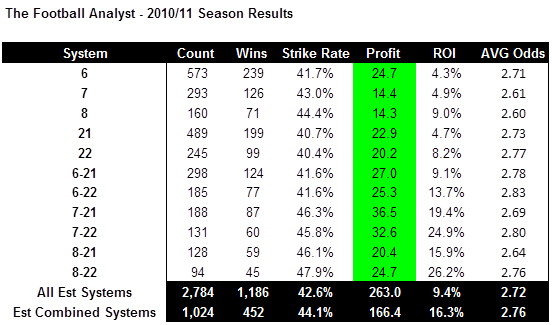 For the 2011/12 season, I had 22 live systems in total. In many ways, this season in my opinion was the most successful season as many systems made a profit in every single month which isn’t easy to do. Here are the results by system:

For the 2012/13 season, I had 41 live systems with the additional New Systems and the introduction of the Euro Systems. Here are the results by System: