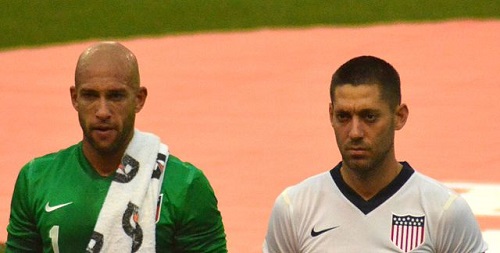 Group G’s second fixture will have Ghana taking on the USA and it will be played on Monday 16 June, kick off 11pm UK time. Although the other Group G fixture involving Germany and Portugal takes the spotlight off this game it is very important in terms of group standings.

The USA coach, Jurgen Klinsmann was quoted speaking of the importance of this game: “It’s pretty much like a knockout game anyway. We know if we can get the three points against Ghana, we put ourselves in a very good position for the next game in Manaus, in the Amazon.”

Ghana’s 23-man squad is the youngest of the 32 nations participating in the tournament with an average age of 25 (Michael Essien the oldest at 31 and Rashid Sumaila youngest at 21).  Their World Cup qualification group was pretty straightforward, thrashing many of their opponents on the way and suffering only one defeat.

Ex-Sunderland striker, Asamoah Gyan was the top scorer for the Black Stars as they had another hurdle in Egypt to cross before getting a ticket to Brazil. They performed admirably in the first leg with Egypt humiliated 6-1 and though they went down 2-1 in the 2nd leg, Ghana still qualified comfortably.

USA were the top-seeded side in the CONCACAF qualification and also comfortably qualified for the World Cup, topping the group in both the third and fourth round qualifications and finishing above other qualifiers Costa Rica and Honduras. Many new faces have been included in the squad, namely defender John Brooks and winger Julian Green, both playing in the Bundesliga.

This fixture has a World Cup history of itself, both the teams clashing in the group stages for the past two World Cups (2006 and 2010). Ghana had the upper hand in both of those fixtures and USA will be keen to get revenge this time around.

Both the coaches are very optimistic about their team but cautious of not being over confident about their chances. The Ghana side which defeated USA last time has had new additions but the core team still remains the same. Aging midfielders Michael Essien and Sulley Muntari could give way to the likes of Mohammed Raibu however. USA decided to drop their star player Landon Donavan who is kept as a standby for the tournament and they will look to Clint Dempsey for inspiration.

The match could become a one-sided encounter with Ghana having the greater attacking power and their rugged defending potentially causing problems for the USA. The bookmakers also seem to support this notion and Totesport have the African side enter the game at 8/5 to bet365’s 21/10 for an American victory. The draw is valued at 12/5 and I won’t be taking that given how desperate both teams will be to win here.

Klinsmann might opt for a more rigid, compact structure for the team and instruct his full backs to keep wingers Andre Ayew and Cristian Atsu in check. USA custodian, Tim Howard will need to command the backline well to keep the rampant Gyan silent.

Ghana’s main problem might be the darting runs of Michael Bradley and Dempsey behind the backline. Raibu, a kind of an unknown commodity outside Africa will need to be at his best to shield his back four by sniffing out danger in the center of the park. Their only other concern is the lack of a commanding first choice keeper in the squad.

Ghana should be a treat to watch with the kind of attacking talent they possess in Ayew brothers (Jordan and Andre), Kwado Asamoah, Atsu which is a sweet selection headache for any manager.