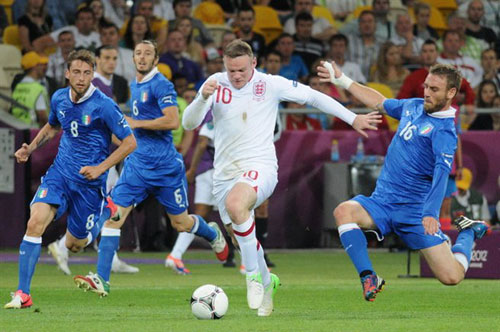 Four-time world champions Italy will begin their FIFA World Cup 2014 campaign with a stern test against 1966 champions, England in a match that will be played at the Amazonia Arena in Manaus on Saturday, June 14 at 11pm UK time.

The result of this match will be extremely crucial for the teams with qualification to the knock out stages far from being guaranteed in this group which also has Uruguay and Costa Rica in it. Not for nothing is this called a group of death.

Bookmakers are effectively predicting a draw with leading bookies all offering odds of 2/1 for a stalemate. Italy enter the game at 19/10 (BetVictor) while Coral are offering 21/10 for an England victory at Manaus.

England are expected to face some problems with the hot and damp weather although it’s winter in the Southern Hemisphere at the present time. To help his team come to terms with the conditions here, coach Roy Hodgson had camped his team at Miami in USA for some time where England faced Ecuador in an ill-tempered friendly that saw both Antonio Valencia and Raheem Sterling sent off.

It must be said that Hodgson’s team enter the tournament as outsiders despite qualifying top of their group in the road to Brazil. Interestingly, Betfair are offering 6/1 for an England win if you are their new customer – probably such is their confidence out of this one.

However, England could be dangerous opponents for Italy on Saturday, with the presence of extremely talented youngsters such as Daniel Sturridge, Raheem Sterling, Ross Barkley, and Jordan Henderson besides some hungry experienced internationals in Wayne Rooney, Frank Lampard, and Steven Gerrard, making them a good all-round side. Whether they have the defence however to stall their opponents, remains to be seen.

Coral are offering 13/2 for Wayne Rooney to open the scoring while Sturridge is 7/1 (Ladbrokes) to be on the mark first. From an Italian perspective, Mario Balotelli could be the man to watch out given he’s got a lot to prove – who can forget the brace he got for his side in the Euro 2012 semi-finals against Germany to propel them to the final?

Italy qualified for the World Cup in typical fashion in their qualifying group. However, the last few months have been a disaster for the Azzuris who are without a win in the last 8 matches. Although they have traditionally been a potent force in FIFA tournaments, such a long winless streak is hardly ideal preparation for a tournament of this magnitude.

There are some real world class midfielders that the Italians can boast about in their squad which includes Daniele de Rossi, Claudio Marchisio and the evergreen Andrea Pirlo who has just signed for a further two years at Italian Serie A champions Juventus. This world cup will be his last outing for Italy however and he has now announced his retirement from international football.

The FIFA World Cup 2014 will also be skipper Gigi Buffon’s fifth straight cup with the skipper motivated to take his country to yet another win. Their defenders – Georgio Chiellini and Leonardo Bonucci are two of the biggest names in Italian football and it is perhaps their presence that has caused a 0-0 draw to be the favourite pick of the punters for this match at odds of 11/2 (William Hill).