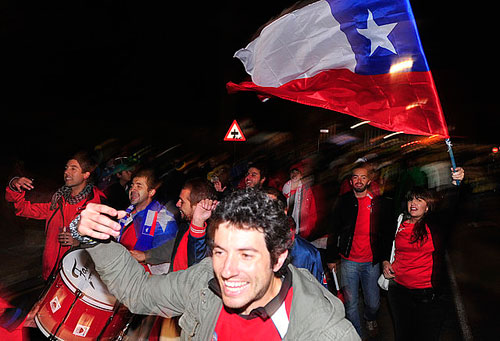 The majority of football fans will know all about Spain and Holland and for this reason greater betting value can be found on the lesser know matches. With that in mind let’s take a look at the 2nd group B match between Chile and Australia.

Chile will begin their campaign at the FIFA World Cup 2014 in Brazil with a match against Australia late at 11pm this Evening. The match will be played at the Pantanal Arena in Cuiaba.

Ranked 16th in the world, and guided Argentine Jorge Sampaoli, Chile play a direct brand of attacking football and can rise further with a good world cup. They had qualified for the world cup quite comfortably – four points behind group winners Argentina and two behind runner-up Colombia.

And given how Australia struggled throughout their campaign, having now switched their Confederation to Asia, it comes as no surprise that bet365 are offering 2/5 for a Chile win, while the odds are stacked up at 19/2 for Australia to notch up their win.

Interestingly, both teams are being viewed as outsiders in a group that also features the reigning world champions Spain and Netherlands. For that reason alone, this opening match will work as a must-win one for both sides – a difficult situation to get into as early as this!

Chile have done well in their warm-up matches leading to the World Cup and some of the friendlies that they had played abroad. Their 2-0 win against England at Wembley where Alexis Sanchez scored a goal in each half was a great performance. If they can find a way to match the tempo that they displayed back then, the La Roja will be very hard to stop.

Their two main players, Sanchez and Arturo Vidal have both had great seasons in Europe with Barcelona and Juventus respectively. Sanchez is the favorite to start the scoring with Bwin and Betvictor both offering odds of 9/2 for the possibility. Vidal, meanwhile, has been the star for Juventus ever since the Old Lady managed to sign him up. He is perhaps the best box to box central midfielder in the modern game who plies his trade currently.

The likes of Mauricio Isla, Gary Medel and company are good players who have made their names in Europe. Eduardo Vargas, who plays for Valencia, has always played well for the national team and has 14 goals in 30 appearances for Chile who are very much the team to beat for this fixture. Bet365 are tipping Vargas to open the scoring for Chile and offering 11/2.

Australia, ranked 62nd in the world, made life a bit difficult for themselves in the qualifiers before sealing their berth in the finals. Their preparations to the world cup was disrupted when highly rated coach Graham Arnold was sacked following crushing defeats to Brazil and Germany.

The new coach, Ange Pstecoglou has taken over since then and Australia’s performances in the warm-up matches going into the World Cup can best be described as below par. If their 1-0 defeat to Croatia is anything to go by, Australia will try to play and extremely physical game.

Judging by Tim Cahill’s interview the other day, it appears that the Socceroos could try to hustle and bustle their opponents into making mistakes. Australia will struggle to make clear cut openings in front of goal and they don’t really have the strikers to do well at the World Cup.

Looking at all of this, I am favouring a 1-0 or a 2-0 win for Chile, with Ladbrokes are offering 11/2 for the latter. Chile are 6/5 (Betway) to win both the halves of the game which may also be worth considering.