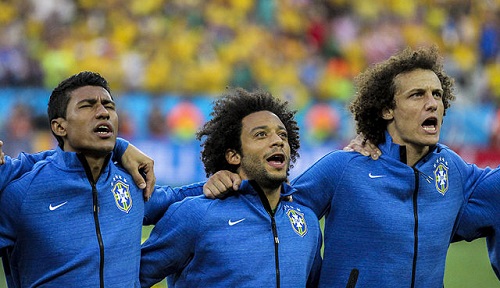 Brazil need to show some passion in this one – Image by copa2014.gov.br

The match for the third place in the 2014 World Cup will be played between Brazil and the Netherlands on Saturday, July 12.

A bit of a meaningless match for the two squads which were decent enough and had a good showing in the tournament. The Netherlands were perhaps more impressive with coach Louis Van Gaal rallying the comparatively inexperienced Dutch squad. Brazil stuttered along the way and all along everybody thought that the fairytale will end but a loss of that magnitude to Germany was hardly expected.

Brazil’s approach to the semi-final was a bit overzealous considering the German midfield which is able to exploit spaces and ping in passes with surgical precision.

With the suspended defensive lynchpin Thiago Silva, the Brazilian back four looked more indisciplined with the main culprits David Luiz and Fernandinho who were caught unawares for almost all the first half goals.

The fullbacks did what they were asked of but losing the ball high up the pitch was one thing they certainly paid for. Brazil’s domestic setup has given the world players like Ronaldo, Romario, Cafu and Ronaldinho, but will the next revolution come again; the question remains.

The Netherlands squad have players who are either new to the national setup or experienced internationals who are almost on the wane.

Van Gaal, with his exceptional tactical mastery turned this lot into a compact and fearsome unit. With the Robin Van Persies and Arjen Robbens of the world, Daley Blind and Ron Vlaar also were some names who enhanced their reputations in this edition.

Some insane gambles on substitutions and team selection did not pay off for Van Gaal against Argentina and they failed to make an impact on the match.

The second semi-final was nowhere near as exciting as the first as both teams were overcautious and both their no.10s (Lionel Messi for Argentina and Wesley Sneijder for the Netherlands) were marked heavily and denied space to operate. Against Brazil and in a match without as much pressure, a much more proactive Dutch side can be expected.

The game does not hold much of an importance now that both the teams are out of the race but still a third place finish is sweeter than fourth place.

Brazil will look to give their fans some solace in the fact that they did try hard and clinched a third place whereas, the Netherlands will be looking to give Van Gaal a parting gift as he flies to England to manage Manchester United (the game against Brazil will be his last with the Dutch national squad).

For Brazil, Silva will be back at the heart of the defence and will provide more stability. Fernandinho might make way for Paulinho to provide more industry in the midfield. Bernard should keep his place considering he was the bright spot in the Brazil side.

As brave as Van Gaal is, he might be tempted to give the younger boys like Memphis Depay, Jermain Lens and Leroy Fer a start. Nigel De Jong started against Argentina but was withdrawn in the second half for Jordy Clasie.

Here’s one for the punters, the Dutch manager has already bemoaned the fact they have had to play this game after crashing out of the tournament, so expect a few reluctant players on the field. And what about Brazil, they will be hurting, a lot, and could come out all guns blazing.

Back a wounded Brazil to win this one at 2.2 (6/5) with BetVictor as an apology to the fans for their shambolic display against Germany.

With nothing really at stake it’s also likely to be a high scoring match and over 2.5 goals looks certain.