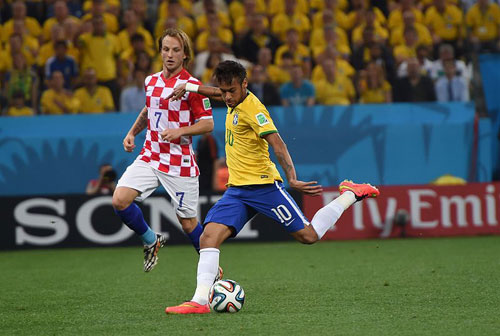 Group A will see Brazil clash with Mexico at the Estadio Castelao at Fortaleza as the second set of matches kick off in the group stages of the FIFA World Cup 2014 on Tuesday, June 17 with kick off at 8pm UK time.

Brazil, who are ranked third in the world in the Coca-Cola rankings, dispatched Croatia in some style in the opener after having fallen behind initially. After conceding an own goal, the Selecao struck thrice to claim a 3-1 win over the Croats with Neymar and Oscar doing the business for the home side. However, the win was not as straightforward as the score line suggests and the manner of the victory was far from convincing.

The Japanese referee in charge of that game, made some questionable decisions and one of them saw him award a soft penalty to the five-time champions while denying a penalty to the Croatians. The ref also denied Croatia what looked like a perfectly legal goal in what was a hotly-contested match.

Notwithstanding everything that went against Croatia the other day, the fact though remains that the man who has been destined to become the star of the World Cup took the game by the scruff of the neck and made sure that Brazil ended the match as the winning side.

Neymar’s first goal of the World cup to equalize for the home team was the stuff of absolute genius as he went on a mazy run before unleashing a well-placed shot that went in off the post. The number 10 also held his nerve as he put Brazil ahead with a penalty with 20 minutes left to play. Oscar was his usual live-wire self and he is expected to carry on the good work in his position in behind the striker.

Although they look great going forward and have a solid midfield, Brazil will need to up their game and buckle up from a defensive point of view if they are to go all the way in the ongoing edition of the World Cup. They have the personnel to do the business for them in defence with Dani Alves, David Luiz, skipper Thiago Silva, and Marcelo all having proven themselves in European club football.

Mexico, meanwhile, are ranked 20th in the world by FIFA and find themselves in second place in Group A after having defeated Cameroon in the opening round of matches. They won by a solitary goal from Oribe Peralta on the occasion as Rafael Marquez and Hector Moreno performed commendably at the heart of the defence. In fact, again, had it not been for refereeing errors, they would have carved out a three-zip win their opener.

While the defence held firm against the Cameroonians, matters will not be as straightforward against Brazil. Marquez and Moreno will not be able to keep the Brazilians at bay if the others do not contribute in defence. They will need plenty of help from the likes of Jose Vasquez, Hector Herrera, and Marco Fabian in order to keep the home team at bay.

One gets the feeling that Miguel Herrera’s Mexicans will have more joy against Brazil if they try and attack the home team. The Brazilian defence looked pretty ordinary in the opener and if I were the coach, I would set about a team to attack with Javier Hernandez in the playing XI alongside Peralta and Giovani Dos Santos. After all, Hernandez averages a goal every couple of games in international football for Mexico with 35 goals in 63 games for his country.

Recommendations:
Both teams to score and Brazil to win: 5/2 (Boylesports)