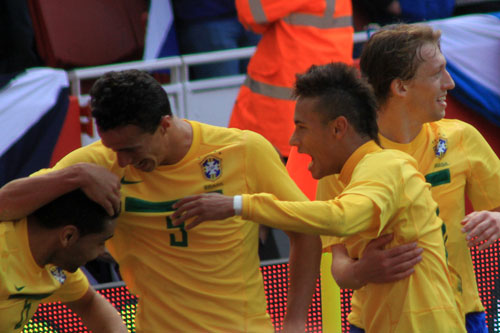 Five-time world champions and hosts for the FIFA World Cup 2014, Brazil, will kick-off their World Cup campaign with a match against Croatia at the Arena Corinthians in Sao Paolo this evening.

Brazil go into the FIFA World Cup as overwhelming favourites to lift the trophy at the Maracana. Although they are missing the flair of their last, all-conquering outfit, the Selecao do possess the best defence in their history besides a solid midfield and a versatile attack.

And they will be up against a Croatian side which has struggled in recent times to put the ball in the net.

Hence, the top three, most popular odds currently, all prophesize the home team winning with a clean sheet. BetVictor offers 19/4 for a 2-0 win for the home side while the odds are stacked up at 8/1 (BetVictor) for a 3-0 win for the Selecao. This is a testament to the strength of the home team’s defence going into the World Cup and these two score lines stand out as the best value here.

Skipper Thiago Silva is considered as one of the best defenders in the world and he will be accompanied in the centre of defence by David Luiz, who moved to French giants PSG from Chelsea in that record 50 million pound move. Dani Alves and Marcelo form one of the deadliest full back pairings for a national team in recent memory.

Paulinho and Luiz Gustavo look set to feature in the holding midfield roles for the home team who play an advanced 4-3-3 system with a lot of width.

Luiz Felipe Scolari backs Fred as his main striker and seldom makes changes for the position, although it is widely believed that Fred is not the best striker in Brazil. However, his flaws are compensated by the fact that he has a great habit of scoring important goals for his team.

The number 9 is well complemented by the trio of the strong and pacy Hulk on his right, the skilful Oscar behind him looking to make incisive through balls, and the swashbuckling Neymar on his left. Neymar is the overwhelming favourite to open the scoring for Brazil against Croatia with leading bookmakers offering 7/2 (bet365) on that possibility. Neymar is also backed by Betfair to be man of the match with odds of 9/4 on offer.

Niko Kovac and his wards will be wary of receiving a footballing lesson from Brazil. Croatia will set up in a manner which will be aimed to frustrate the home team by defending deep in their own half while also looking to attack on the counter. They might have plenty of joy with Eduardo or Nikica Jelavic on top as Mario Mandzukic suspended for the opener.

Luka Modric and Ivan Rakitic will pose enough threat for any team from the middle of the park. The pair have great engines and have the ability to dictate play which will be useful against Brazil. Dejan Lovren and his comrades in defence can expect a sea of Brazilian attacks which will be difficult to deal with.

Bwin are offering money back if Brazil fail to defeat the Croatians in the opener and that should be a great way to start off the World Cup campaign – putting your money on the hosts, who are 3/10 (Bwin) to win the game.

Other fun bet: Get 2/1 (Coral) if Brazil wear yellow against Croatia.