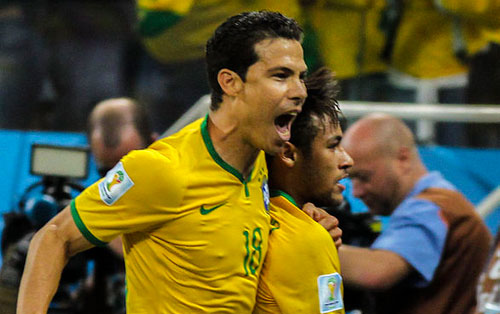 The World Cup knockout stage starts with a second round encounter scheduled between the two feisty South American teams in Brazil and Chile on Saturday 28th July. The match kicks off at 13:00 local time and 17:00 UK time.

Brazil have been the World Cup favourites since the draw was out and they proved that they still have the Brazilian flair which the 2010 squad lacked so much.

They finished top of the group, edging out Mexico by goal difference which included two impressive victories over Croatia (Result: 3-1) and Cameroon (Result: 4-1). These two victories were sandwiched by a drab draw against Mexico (Result: 0-0) which saw the media doubt Brazil’s hunger and ambition.

Chile’s World Cup campaign has been impressive so far with only the defeat to the Netherlands (Result: 3-1) being bit of a spot on their exciting campaign.

Two successive victories against Australia (3-1) and Spain (2-0) elevated their status as a force to reckon in the tournament. They were responsible for Spain’s exit in the World Cup by outfoxing them in almost every department, a noteworthy feat considering Spain’s roster and status.

Though they are in South America, playing conditions in Chile differ a lot from the tropical Brazil and they have done admirably well in adapting to the conditions.

Brazil’s main issue in the first two matches was the unbalanced midfield. This included Oscar being shunted out in wide positions with two defensive minded midfielders in Luis Gustavo (he has dropped very deep to play as the third central defender) and Paulinho guarding the backline.

With nobody linking the attack and midfield, the attack was in total disarray. This was more prominent against Mexico who were able to strangle Brazilian midfielders and also, to some extent Croatia who successfully kept Oscar and Neymar quiet on the wings. Paulinho’s World Cup qualification form seems to have vanished and he’s looking more like a passenger than driving midfield force. Fernandinho’s performance against Cameroon should give something Luis Scolari to think about.

Chile’s team has a blend of cultured midfield players like Vidal and dynamic wingers/ forwards like Sanchez and Eduardo Vargas. The balance in the team is what provides the attacking spark, but defence might cause issues for Chile against Brazil.

Gary Medel, who is primarily a defensive midfielder had been asked to play as a central defender against Australia and Spain. Though he performed admirably against Diego Costa of Spain, Australia’s Tim Cahill did give him a rough time. With burly forwards like Hulk and Fred, the physicality factor does come into play when you have a diminutive centre back.

The game should be an open one with both teams providing the typical South American flair which the neutrals love to watch. Brazil’s wingbacks have a huge responsibility to contain the threat of Chilean wingers. Chile’s attacking intent means Brazil has to defend deep and hit on the break, which also applies the same to Chile.

Over the last two years, Brazil and Chile have played each other twice and one of them ended in a draw while another resulted in a 2-1 win for Brazil. Over the last 10 games between these two sides, Brazil has won nine and the other saw them draw.