It’s hard to gauge exactly how boxing fans collectively feel about Tony Bellew and David haye fighting again. There are obviously plenty who are exited for the rematch on May 5th but there are also many who think that it’s not a fight worthy of pay per view. The Haye achilles injury in the first fight might it slightly farcical but it also made it an exciting spectacle, if not a great boxing match.

It all started with Tony Bellew’s WWE style call out of Haye after his win against BJ Flores and that alone will have rubbed certain people up the wrong way. Bellew has done well to have achieved the popularity and financial rewards he has but also been extremely fortunate and Haye is well past his best, with his body failing him on multiple occasions. The re-match was of course scheduled to be last December and Haye pulling out through injury (arm) has possibly contributed to interest waining slightly. There are no belts at stake either so you can see why some people aren’t that fussed about this ‘grudge match’, but because of what happened in the first fight there is unfinished business and that usually keeps a fight interesting.

Haye was reluctant to use the injury as an excuse, partly because of all the talking he did in the build up but also because he’s used injury as an excuse before, to much ridicule. It’s not difficult to see though, that Haye, as unimpressive as he was, was still winning the fight comfortably before the achilles went and if he stay injury free he surely wins this rematch.

Bellew can’t win on points and if he couldn’t truly knock Haye out when he was fighting on one leg (towel thrown in when fell through the ropes) then what chance does he stand this time around. Haye is in better shape and knows this is his last chance to stage a comeback. There’s no trash talk on Haye’s side either, just a determined and focussed fighter who is levels above Bellew. Haye has a similar mindset as Carl Froch did prior to his rematch with George Groves. Perhaps he’s even seen the same psychologist.

The odds largely agree that Haye likely wins but he has moved out from a 1/3 shot in the first fight to a 1/2 shot in the rematch.  With Bellew having won the first fight you’d expect the odds to move in this direction but I’m not sure they should much, if any,  if I’m honest. Haye was a 66% favourite before, meaning that he doesn’t win 33.3% of the time and the first fight was surely just one of these 33. It was a freak result and so I’d have the odds exactly as they were.

If anything, the first fight has given me more confidence in Haye out boxing Bellew and the affirmation that Bellew can’t knock Haye out. The chance of injury is perhaps greater but these just about even themselves out for me and 1.5 looks a decent price on the Haye win. Some books are a bit skinnier than 1/2, notably sun bets who are close to 1/3. As you can see from the pie chart below the number of bets placed on either fighter are similar and this is probably what’s keeping Haye’s price a tad big. 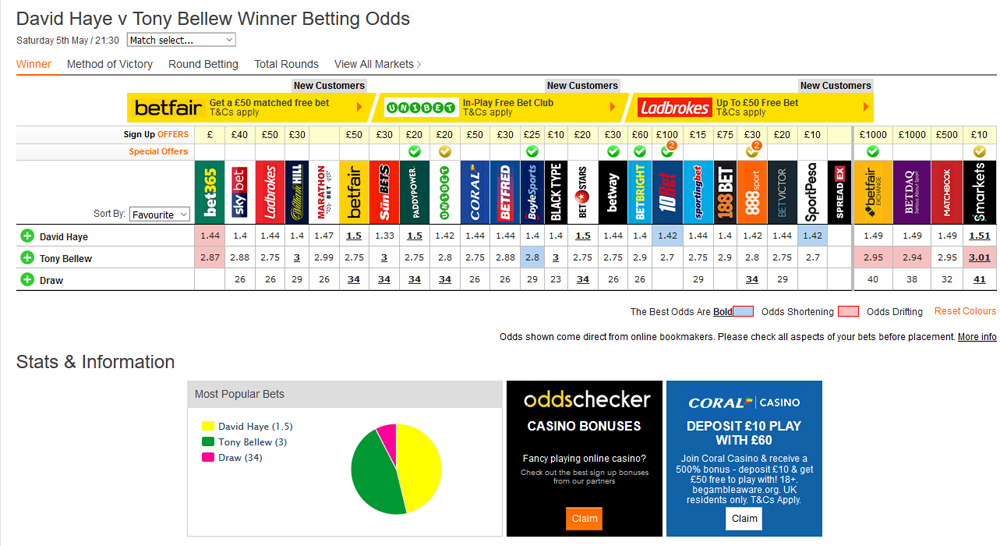 Bellew fearing for his safety?

Bellew is renowned for talking about coming home safely to his wife and kids but talk related to this seems to have increased in the build up to this fight. Since the last fight Bellew has experienced tragedy himself with the passing of his brother-in-law and we’ve also seen boxer Scott Westgarth die in the ring. Bellew is so close to retirement now and continuing to fight on wasn’t an easy decision for him and his family. It’s now 14 months since he was last in the ring and it seems that perhaps he could have doubts about his decision to fight on. Did he really need another pay day?

Tony has also made it clear that there’s no chance of him getting in the ring against the incredibly powerful Joshua and Wilder as they are too big and too strong. An honest admission but it’s rare for boxers to talk like this and usually for good reason. Bellew is perhaps giving too much away about his fears and it’s not great to be thinking in this kind of way in the build up to a fight.

Back Haye to win early

Haye is a decent price for the win at 1/2 but if you don’t betting on odds on shots then it’s a good idea to take a look at the rounds betting. Haye came out swinging last time and he won’t be looking for a huge shot early on but by boxing sensibly his natural ability and strength could still see him land a knockout punch in the first few rounds. Haye has said himself that merely beating Tony Bellew is not sufficient this time. He has to win in style if he has any hope of continuing and mixing it with the bets in the heavyweight division once again.