This week has seen the return of the tennis and although I myself tend not to do much trading until the start of the Australian Open, there is the odd match that takes my fancy. I only trade with small stakes in these pre-slam tournaments however as form and motivation is hard to judge.

One match that took my fancy today though was Azarenka against Voegele in the quarter-final of the WTA Brisbane International. I know what Vogele is capable of and she had some good wins against top players at the end of last year. Azarenka struggled with injury and lost a lot of matches at the end of her season and I was very surprised to see the market effectively award the match to Azarenka, particularly knowing that Voegle is always one who fights to the end.

I had a couple of lays at 1.02 and 1.03 and secured a free bet at odds of 1.05. The odds eventually moved back in to 1.01 to the point where there was no money available to back Azarenka. At this point there was however money available to back Vogele due to the way the odds ranges work on Betfair. Odds were matched upwards of 200 and when I checked the graph I saw that £33 had also been matched at 1000.

A lot of the time odds of 1000 are only available to back when the event is either actually over or as good as. In this particular case there was still a lot of the second set left to be played. I was tempted to go in and lay again as I still thought a comeback of sorts was possible.

Most trading takes place on the favourite because that’s where the most money and action is but in this case, if I had layed at 1.01 it would have been a mistake when I could have backed upwards of 100.

The odds soon came back in to 1.1 and this trend continued when Vogele managed to take the second set. Azarenka eventually traded as high as 1.46.

Obviously not too many matches will see such an extreme movement of odds but a lot of profit can be made just from the original move out to 1.1 and I decided to look at the extreme case and see what the difference would have been from laying at 1.01 and backing at 1000.

This is compared to backing £10 at 1000 for a possible profit of £10,000 and an equal green of just short of £900 when the odds reached 1.1 Some difference I’m sure you’ll agree. See the screenshots below but ignore the currents odds as this one was not inplay yet and this is just to demonstrate the point.

I didn’t get any matched in Azarenka’s match at 1000 and it’s undoubtedly more difficult to get matched at these odds than to lay at 1.01 but there will have been an opportunity to easily better the 1.01 which is effectively odds of 100 and getting matched at 200 or 300 should be no problem.

So, it’s important to remember this anomaly in the odds and be mindful of this when there are no available to back odds on the favourite.

Even at the more regular odds movements it can be difficult to determine which selection offers the best value. If you’re ever unsure whether it would be better to back at a price or lay at another then you can use our back lay equivalents calculator. 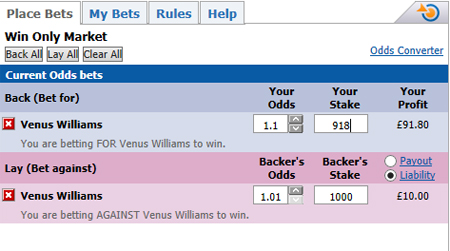 Backing the underdog instead of laying the favourite