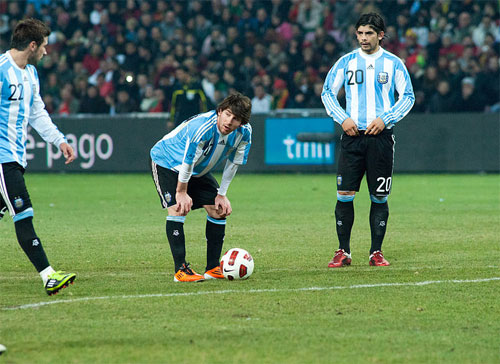 Argentina face off Bosnia-Herzegovina in their first group F match on Sunday, 16 June. They are two most likely group-toppers and the outcome of this tie should be pivotal in the final standings in the group.

Argentina come off as the CONEMBOL group leaders, the South American qualifiers and have an impressive pre-World cup friendly record. The confidence should be high in the group with many of the current players having played in the 2010 World Cup. Losing to Germany in the quarter-finals with a 4-1 score line raised a lot questions on the coach, Diego Maradona and his tactics. After he stepped down, Alejandro Sabella was appointed manager and his experience at the domestic level has improved the team a lot.

Bosnia-Herzegovina are the newbies on the World Cup scene but one should not count them as minnows. The squad comprises of players from the domestic leagues across Europe with stars like Edin Dzeko and Miralem Pjanic. The coach, Safet Susic has tinkered a lot with the squad and the tactics. Initially playing with two strikers in the rigid 4-4-2 formation, Susic found out later that they needed to be more realistic with the kind of squad they had. So switching to a more fluid formation helped them to get through the group stages.

Argentina and Bosnia-Herzegovina can be thought as two attack-minded sides but with a sea of difference in the attackers available at disposal for respective coaches. Argentina boasts of talents like Lionel Messi, Sergio Aguero, Gonzalo Higuain and Angel di Maria, whereas Bosnia can look up to Dzeko, Pjanic, Vedad Ibisevic and Edin Visca.

Argentina have matured a lot and the team has more shape to it than it was during the coach Maradona era which was evident during the qualifiers. Argentina’s game still revolves around Messi, his movement in and around the box important to the build-up. Angel di Maria has always been quite underrated but this season he played excellently with Real Madrid proving to be a game changer. Di Maria now is a complete winger and can share the creative load with Fernando Gago.

Given the way things have gone in the World Cup so far, and given the manner in which the two teams are stacked up, it could well be a goal-fest with the defenders on both sides having a task cut out for them. Till this day, World Cup has seen three matches with two 3-1 and one 5-1 score line so there’s a certain expectation that a game that involves Argentina should produce magical moments.

One Reply to “Argentina v Bosnia-Herzegovina | Betting Preview and Tips”